The value of public health: investing in prevention for our post-Covid recovery

/ Blog / The value of public health: investing in prevention for our post-Covid recovery 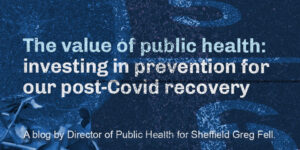 We are emerging tentatively (we hope) from the most significant public health crisis of our lifetime. Never has the spotlight been on public health as much as over the last year. One challenge will be picking up where we left off, and focusing on how public health professionals can shape recovery. The direct and indirect consequences of Covid-19 will shape our lives for a generation.

Much is talked about ‘building back better’ and a ‘new normal’. This is laudable, but won’t magically happen. It will have to be activity built; the policy environment will need to support our goals.

The dog that doesn’t bark

Lena Wen, the Baltimore City Health Commissioner, once characterised public health as ‘the dog that doesn’t bark’. When public health interventions control meningitis outbreaks, prevent toxic poisonings or lower infant mortality, it should be front page news. But you never see these headlines. Tobacco control policy has saved countless deaths over decades yet rarely, if ever, gets any headlines. Public health professionals don’t capture the same place in public imagination as other groups. Perhaps Covid-19 might change that, but it is up to us to capitalise on this. 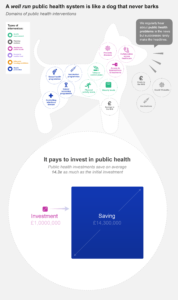 Preventing frailty in early and mid-life

In Sheffield, we have demonstrated (using similar methods as the benchmark study by Karen Barnet and others on multimorbidity) that delaying the onset of second, third and fourth conditions can benefit NHS and social care demand. A person’s mid-life multi-morbidity profile predicts later frailty, which opens early prevention intervention options.

The notion that Covid-19 will be followed by a deconditioning pandemic has been well put by others. We have an opportunity to address this. But there are issues to be addressed around clinical culture and practice, investment and service models, as well as the expectations that the Government gives to the NHS on ‘prevention’ and how success is measured. Building the machinery around this will be critical, as will changing the expectations of the centre and the way the system is managed and regulated.

It’s not about lack of evidence

We are awash with evidence on the positive impact of smoking and tobacco control. There are multiple NICE Technology Appraisals on specific (pharmaceutical in the main) interventions, and many NICE Clinical and Public Health guidelines on service design and delivery.

A strong evidence base and approach is in play for almost all the big blocks of interventions and services funded by the public health grant, albeit stronger in some areas than others.

The best I have ever seen on broader return-of-investment for public health interventions (defined as the scope of things that usually fall under the scope of the public health grant) is this Research Paper by the York Centre for Health Economics. This work demonstrates and quantifies that prevention is cheaper than cure, by a margin of threefold on average. This isn’t to set treatment against prevention – far from it. It is a very clear articulation that the value of average spending on public health grant-funded services is more valuable (outcome wise) than NHS spending, by a factor of three.

One of the authors of the report quantified the impact of reducing the public health grant by £45k as equating to one additional death. The estimation of value is likely to be an underestimate for several reasons:

At macro level, Wanless demonstrated the value of public health spending from an HMT perspective two decades ago.

The disinvestment in local government has affected every area of local economies. At local level, the contribution of local government to what many call the ‘determinants of health’ is critical; less investment has led to cutting services, slower and reversing progress and poorer outcomes. The IFS demonstrated that the greatest impacts of this fell on the most disadvantaged, and the Marmot Review 10 Years On highlighted the impact of the disinvestment on health and well-being.

It’s about belief, not evidence

Reforming the public health system is an obvious opportunity to put our focus (and investment) behind our rhetoric. It isn’t about evidence – it is about belief and the need for short term return, as well as the difficulty of attributing intervention to return. Yet, as Dave Buck consistently points out, we all want more ‘public health’ till it comes to paying for it, at which point we keep cutting our investment.