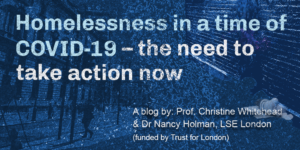 In the first in an investigative series of blog posts exploring housing issues, the team at LSE London breaks down how the pandemic has impacted homelessness and predictions of what will happen next, before calling for action now to prevent high numbers of households from being forced to move into precarious living situations.

Since the pandemic hit, most of the discussion around homelessness has been concentrated on the Everyone In initiative which worked to bring rough sleepers off the streets and to rehouse large numbers of mainly single people, living in accommodation with shared facilities often deemed unsafe in a COVID-19 environment.

However, almost nothing has been said about the very much larger numbers of households who come forward to local authorities who are accepted as being in priority need and therefore requiring temporary accommodation. Two thirds of such temporary accommodation is provided by London authorities with households spending much longer periods in temporary housing than elsewhere in the country.

One reason for the lack of media interest is the assumption that as notice times had been extended and evictions suspended, the flow of households coming forward would be much reduced. However, mid-pandemic (i.e., the 3rdquarter of 2020, the most recent data available), the number of households being accepted as eligible for temporary accommodation through the traditional pathways was still some 85% of the level in the equivalent quarter in 2019. The proportion of acceptances in London was roughly constant at just over 27% of the England total.

What has changed has been the mix of people being housed:

The reasons for coming forward had also changed:

So, the story suggests that the suspension of evictions was working well, as was the Everyone In initiative. But for all that, significant numbers of people were still coming forward and have continued to do so. The main difference has been the large numbers of mainly younger men coming forward as homeless, often leaving accommodation where they had no legal tenancy rights because they were previously living with family and friends.

What will happen next?

After 1 June it is the government’s intention to move towards normality by slowly reducing the notice period required to start formal eviction proceedings and enabling bailiffs to enforce eviction warrants that are already in place.

There could be a small spike in evictions as bailiffs restart their work and carry out repossessions that have been in place but put off since late last year. More generally it will be a very long drawn-out process over the next two or more years, simply because the courts are now working so slowly and the very large numbers of potential evictions have been put on hold.

Even so, the numbers of people coming forward to local authorities for assistance, either in expectation of eviction or increasingly already evicted, will undoubtedly increase- and go on increasing. A particular issue will be the numbers of people who have Assured Shorthold Tenancies that have not been renewed who could be fairly immediately at risk of a court order.

Our estimates suggest that by the end of the year there could in principle be twice as many households in the private rented sector at risk of homelessness.

Only a much faster improvement in the economy (good!) or the continuing incapacities of the court system (bad!) could mean that numbers will be significantly lower – and in the second case that would simply mean more next year.

In 2019 there were some 30,000 eviction notices made, which resulted in about 15,000 households being accepted as homeless. Our estimates of unemployment and potential evictions now suggest that this figure might be at least double. As these figures do not allow for the backlog, the numbers coming forward to local authorities for assistance from later in the year could be very much higher.

Well over a quarter of the increases will be in London,

where the likelihood of requiring temporary accommodation is very much higher than in the rest of the country.

What should be done?

We believe there are at least three clear and complementary strategies required:

Action needs to be taken by government now to ensure that those in the private rented sector are protected and to prevent the need for households to move in to temporary accommodation.